Illustration by Harry Clarke"The Tell-Tale Heart" is a first-person narrative of an unnamed narrator, who insists he is sane but is suffering from a disease nervousness which causes " over-acuteness of the senses ". The old man with whom the narrator lives has a clouded, pale, blue "vulture-like" eye, which distresses the narrator so much that they plot to murder the old man, despite also insisting that they love the old man. The narrator insists that their careful precision in committing the murder proves that the narrator cannot possibly be insane. But the narrator does not draw back and, after some time, decides to open the lantern. The disease had sharpened my senses - not destroyed - not dulled them. Above all was the sense of hearing acute. I heard all things in the heaven and in the earth. I heard many things in hell. 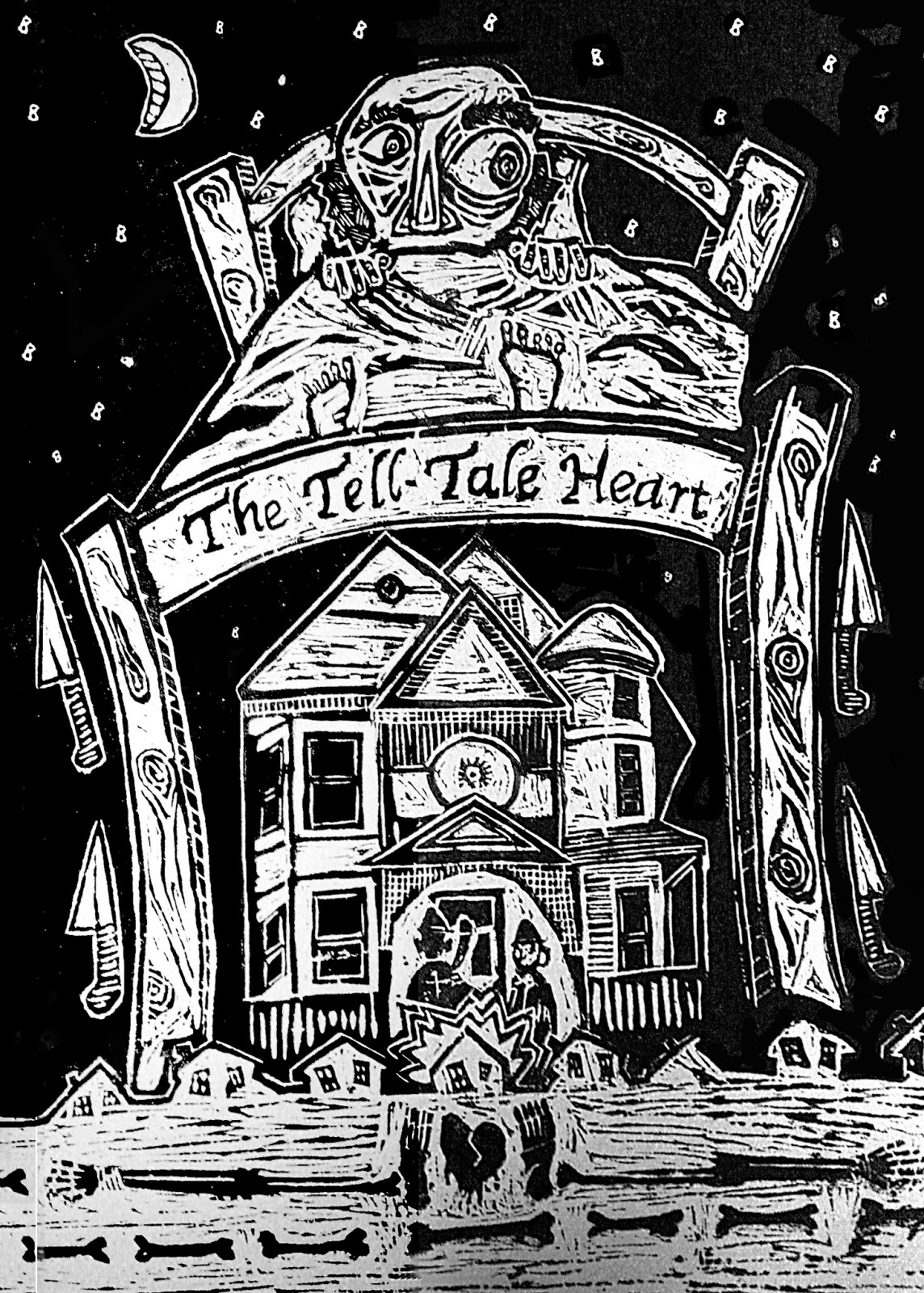 How, then, am I mad? It is impossible to say how first the idea entered my brain; but once conceived, it haunted me day and night. Object there was none. Passion there was none.

I loved the old man. He had never wronged me. He had never given me insult. For his gold I had no desire. I think it was his eye!

He had the eye of a vulture - a pale blue eye, with a film over it. Whenever it fell upon me, my blood ran cold; and so by degrees - very gradually - I made up my mind to take the life of the old man, and thus rid myself of the eye forever.

I was never kinder to the old man than during the whole week before I killed him. And every night, about midnight, I turned the latch of his door and opened it - oh so gently! And then, when I had made an opening sufficient for my head, I put in a dark lantern, all closed, closed, so that no light shone out, and then I thrust in my head.

Oh, you would have laughed to see how cunningly I thrust it in! I moved it slowly - very, very slowly, so that I might not disturb the old man's sleep.

It took me an hour to place my whole head within the opening so far that I could see him as he lay upon his bed. And then, when my head was well in the room, I undid the lantern cautiously - oh, so cautiously - cautiously for the hinges creaked - I undid it just so much that a single thin ray fell upon the vulture eye.

And this I did for seven long nights - very night just at midnight - but I found the eye always closed; and so it was impossible to do the work; for it was not the old man who vexed me, but his Evil Eye.

And every morning, when the day broke, I went boldly into the chamber, and spike courageously to him, calling him by name in a hearty tone, and inquiring how he had passed the night.The Tell-Tale Heart.

by Edgar Allan Poe (published ) TRUE! -- nervous -- very, very dreadfully nervous I had been and am; but why will you say that I am mad? The disease had sharpened my senses -- not destroyed -- not dulled them. Online shopping from a great selection at Movies & TV Store. The Tell-Tale Heart.

by Edgar Allan Poe (published ) TRUE! -- nervous -- very, very dreadfully nervous I had been and am; but why will you say that I am mad?

The disease had sharpened my senses -- not destroyed -- not dulled them. The Tell-Tale Heart by Edgar Allan Poe.

Illustrations for The Tell-Tale Heart were drawn by Harry Clarke, from Edgar Allan Poe's collection, Tales of Mystery and Imagination ().